However, its origin story is still fitting for a heavy metal album cover. Around 8000 years ago, Mount Mazama had a massive volcanic eruption; spewing magma and ash from vents around its base. It expelled so much molten earth that the volcano collapsed in on itself. In mere hours, the towering mountain had formed a caldera – a volcanic crater. Further lava flow over the years continued to raise the lake’s cliff walls and built its two protruding islands.

The formation was so (relatively) recent, the native Klamath tribe has tales of first hand accounts of the eruption. Their story of the sky and underworld gods clashing has been passed down from generation to generation. However, like a game of telephone, I would imagine some of the specifics got altered with each telling.

Like a sad jazz melody, Eiffel 65, or a drumming group of painted bald men, the lake’s water was freakishly blue. It required a unique combination of circumstances for the lake to achieve its vibrant hue.

Crater Lake has no rivers or tributaries feeding into or running out of it. It is purely filled by centuries of rain and snow. It is also the deepest lake in the US – close to 2000 feet. Combined with the average 500 inches of snow the lake receives each year, the result is some of the purest water in the world.

In the late 1800’s to early 1900’s, in an act of brilliant foresight, the lake was stocked with a variety of fish species. Having no natural predators, the fish thrived. However, as the years passed, the mentality of the parks morphed from creating outdoor experiences to preserving their natural state. For this reason, fishing is so encouraged that a permit isn’t even required.

America’s deepest lake is a sight to behold. The blues of the water seen in photos are not exaggerated – it is really that vibrant. Unfortunately for us, nearby forest fires were creating smoke clouds that hid just how blue the water can be.  Oh well, guess we’ll have to go back… 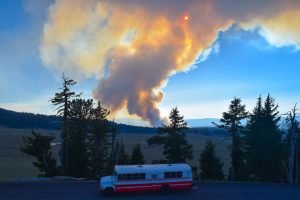 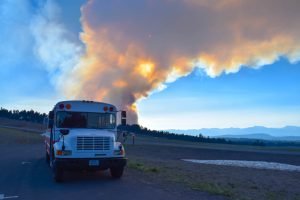 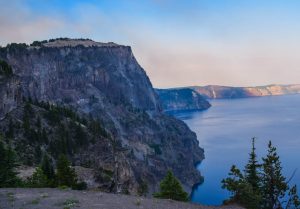 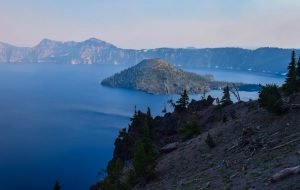 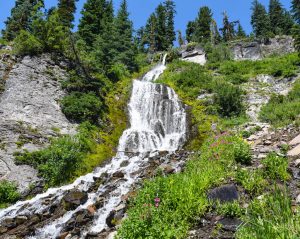 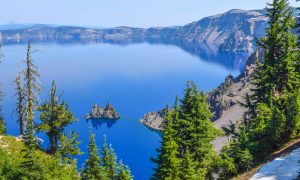 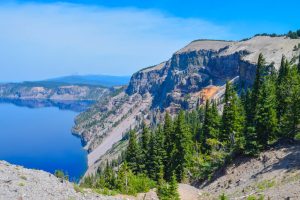 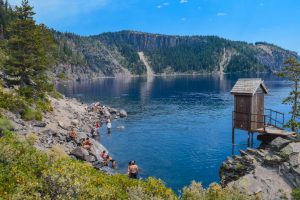