Driving in from the East, Diablo Lake is one of the first features you encounter in North Cascades National Park. The water is vibrant teal and chalky in appearance. It looks like Gatorade—specifically the Artic Blitz flavor. The skim milkiness is caused by fine sediment deposited by glaciers, causing the water to taste considerably worse than Gatorade.

This was our first rainforest park to visit. The floor was covered in thick ferns and fallen pine needles, while the trees wore mossy green sweaters. Jurassic Park would be good source material to mentally visualize the scenery.

Interestingly, that abundant greenery was the cause of nearby fires – one of which had a campground closed while we were there. Apparently the decaying groundcover acts as tinder, just waiting to get right-swiped by a spark or careless camper.

Another perk of the abundant brush was the park having secluded camping. In many campgrounds you are fully aware that people surround you, but that wasn’t the case here. To all of the nudist group campers reading this, this is the park for you.

Seeing North Cascades, followed by Olympic and Mount Rainier National Parks, over the short span of a week made this one a little more forgettable for me. However, it has the most numerous glaciers of any national park in the lower 48 states, a whole southern portion that we skipped, and — according to the image search I just did online – some crazy cool scenery. 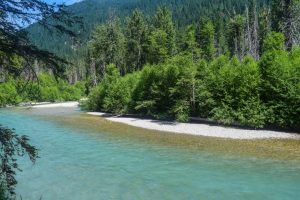 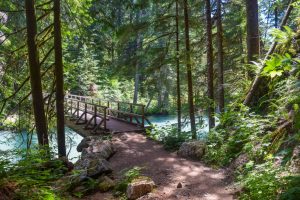 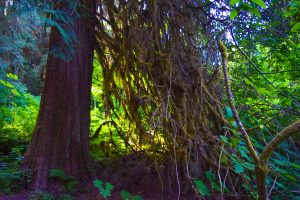 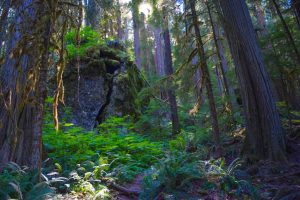