Authors Note: This entry was written almost immediately after removing the seats from the bus. Looking back, this was one of the hardest parts of the build. As such, the trauma was fresh at the time of writing.

Much like a journey begins with a single step, our bus build began with a single bolt. A bolt that, after much agonizing, we would eventually crudely hack away with an angle grinder and a flurry of swear words…

The manner in which school bus seats are attached to the frame is largely the same for different makes and models. Along the aisle, two bolts secure two legs to the steel floor of the bus, with nuts holding those in place on the underbelly of the bus. Along the wall there are four more bolts locking the seat legs onto the sheet metal sides. From bus to bus, the number of seats and a few variations (such as handicap or fire escape aisle seats) crop up, but the general idea is the same.

We chose a seat in the middle as our first victim and began disassembly with a socket drill. The drill grunted in futility and became hot to the touch. Our suspicion that it might not be working was confirmed when the bolt didn’t turn at all (1). Nothing gets past us.

We went with a more primitive second approach— one of us inside the bus cranking away with a socket wrench and sweating his ass off; the other, down below grasping the nut with a wrench and sweating his ass off. While the bolt spun initially, it soon became stuck as it wiggled out crookedly. Not to be discouraged, we kept a great American poet’s words in mind: On to the next one.

The next few bolts on the same seat put up equally fierce resistance, worming into awkward tilted angles before refusing to budge. After a unanimous vote, we agreed that the seat could go screw (or more accurately, unscrew) itself. On to the next one.

The next several attempts were a string of small victories. We found that we could alternate between the socket wrench and drill, using the wrench to get the bolt loosened, and then using the drill to finish. The only problem was that the process was slow—defensive-driving-class slow.

We were impatient, and the sun was laughing at us. 110 degree Texas afternoons are not ideal working conditions. Doing our best low-budget infomercial impression, “There must be an easier way!” we thought. So we whipped out the angle grinder.

Much like dancing in middle school, we gave up on that after about thirty seconds of awkward grinding. To give ourselves some credit, this was our first time to tango with an angle grinder. The grinder is highly recommended for the seat removal step by internet strangers– we were just inexperienced. 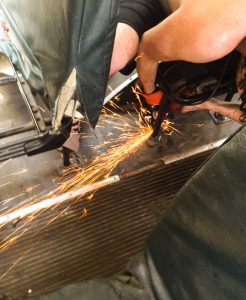 We went back to alternating between using the socket wrench and drill. Some bolts were butter, and twisted smoothly out of place using only the drill. Some bolts were the opposite of butter (margarine?), and fought against the wrench until the last excruciating turn. But turn they did, until we were left with a handful of stubborn bolts– four fastened to the bus’s steel floor, and one affixed to the side panel.

To remove the four floor bolts, we decided to give the angle grinder a shot at redemption. With a little persistence and a lot of sparks, we were able to crudely cut away chunks of the bolt heads, until they eventually gave way to us prying the seats downward. With this technique, the four bolts were removed—including the very first one we had attempted and failed. Sweet revenge.

The last remaining bolt– the side panel bolt– posed a unique set of challenges. Its positioning between the side wall and the seat’s frame prevented us from being able to angle grind it away. The socket wrench had been able to handle 40+ similar bolts, but this bastard not only broke the socket wrench; he caused it to snap clean off (2). 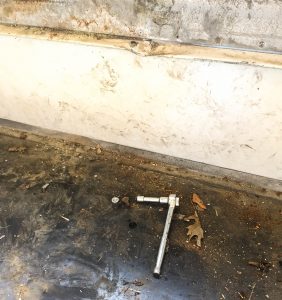 Not to be outwitted by our new archenemy, I began pulling the seat frame back and forth. In a dehydrated fever sweat, trying to pry the seat free. Back and forth. Back and forth. And just as Ryan turned to search for a new approach to removing the seat, the heavens opened, the angels sang, and the bolt snapped. After a few seconds of disbelief, we burst into maniacal laughter and celebration.

The seats were finally out, and we had taken our first steps on our bus journey. And there’s a special place in hell for that last bolt.

1)   In retrospect, we were using an undersized generator to power the drill. The bolts would have been much easier to remove with adequate power.

2)   Again in retrospect, we could have sprayed WD-40 on the bolts to make unscrewing them much easier.

Garden of the Gods, CO
Why a Bus?
Redwood National Park, CA
What are we Doing?