As one travels through South Dakota’s Black Hills, you can’t help but be in awe of the dark jagged shards of volcanic rock jutting from the forested mounds. Highway 244 winds in and out of the natural formations, up and down the slopes of granite and greenery, until finally they arrive into sight.

Protruding from the stony hills: four severed presidential heads. To be fair, George Washington was given a neck and portion of a shirt to accentuate his profile.

Next to him, blasted into the massive metamorphic rocks, a young Thomas Jefferson peers gallantly into the distance. Theodore Roosevelt, the founder of the National Park system we have so enjoyed, stares longingly into the side of Abraham Lincoln’s detached face. Lincoln, looking as stoic as ever, pays no attention to Roosevelt’s invasion of his personal space as he gazes upon South Dakota’s hills.

The Mt. Rushmore monument is basically what one would expect but still worth the visit. The  visitors’ center gives a history of the politics that went into funding the project, the hardships that sculptor Gutzon Borglum faced, and the ideologies for which each president stood.

The memorial can be toured within an hour or two, and we still had a day of funtivities to fill. Luckily, Wind Cave National Park is a hop, skip, and a jump away.

The cave, though less inspiring than Carlsbad Caverns, has its own rewards. While Carlsbad is an expansive self-guided tour, Wind Cave is a guided tour only. Carlsbad had massive chambers filled with stalactites and stalagmites, but Wind Cave had unique formations known as box work lining its narrow chambers. Carlsbad’s large clearings were a breeze to walk through, while I got a mild concussion from a series of headshots through Wind Cave’s low ceilings.

There are a handful of tours from which to choose, each taking its own unique path through the winding tunnels. After much deliberation about which was the best for us, we opted for “whichever is soonest.”

The hour and a half walkthrough flew by. Park Ranger Sara told stories of the formation of the tunnels and the history of the sacred relationship between the local Lakota people and the caves.

Unfortunately, most of my photos turned out like blurry glimpses of outhouse depths, so a tour for yourself would be best. 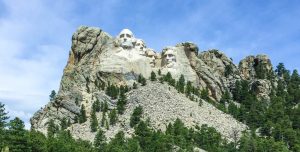 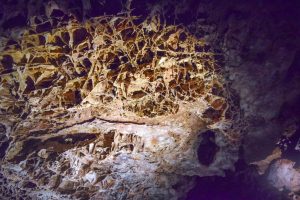 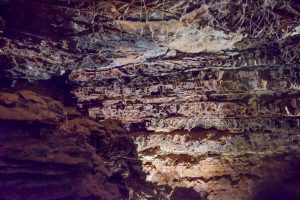