Author’s Note: This post recounts our hike of the Swiftcurrent Pass — the most strenuous hike we’ve attempted in the most beautiful park to date — Glacier National Park, Montana.

The backpacks were jam-packed. Camelbacks of water, additional layers of clothing, and sandwiches filled with questionable lunchmeat were just a few of the supplies in tow. In nine short miles we’d be on the continental divide—assuming delirium didn’t take hold first.

Having visited the ranger station and acquired a trail map, we set out on our longest hike yet. Before we could make it out of the campground, however, a stranger interrupted the trek.

There on the path near the restrooms, a young male grizzly came casually strolling towards us. Almost instantly, people emerged from their tents and trailers to see the lumbering bear. Park rules say to stay at least 100 feet away in the wild, but “rules” and “common sense” seem go out the window when a bear happens into camp.

Shortly after the fan club had formed to take photos, park rangers in a pickup came speeding by. Blaring through their megaphone, they raised the alarm:

This of course caused everyone else within earshot to emerge like prairie dogs from their camp holes. The commotion combined with the whooping of the megaphone sent the bear into a confused sprint.

“Did you see where the bear went?” the rangers eagerly asked us.

We pointed ahead and told them that he had been scared off. 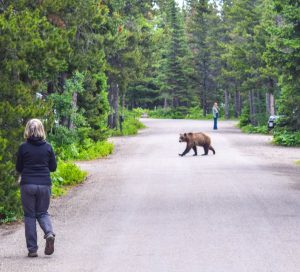 Nothing wakes a hiker up more than a shot of adrenaline in the morning. After the commotion died down, we began the Swift Current Trail with newfound energy and bear-awareness.

The first part of the trail was easy enough. We waded through lush greenery, passing along several crystal-clear lakes. Fluffy phallic flowers, known as Bear Grass, rose out of the blossoms and wildflowers along the path. With barely any elevation change, this portion of the hike was a breeze—until we hit an impasse at the mountain basin. 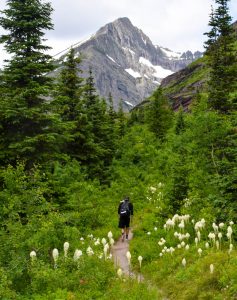 All around, melting snow formed small waterfalls trickling down the mountain slopes. These converged forming a shallow ice-cold river—which we now had to pass. After a lame attempt to bridge the river with a plank of timber, we removed our shoes in preparation to walk across.

Frigid needles shot into my feet. With each step, a high-pitched yelp accompanied the numbing pain of the freezing water and lumpy-rocked foot torture. But upon exiting the river, the pain ceased and was replaced with a sense of refreshment (and a bit of shame due to the shrieking).

The next portion of the trail increased in difficulty. The hike was uphill from here on. Additionally, the weather was dubious. Clouds had formed overhead and were threatening rain. Despite alternating between a weird combination of hot and sweaty cold shivers, we made steady progress through small shrubs and even more bear-dick grass.

Several hikers along the way told us that we may not want to go much further–there were large snowy passes up ahead and the misty haze could turn to rain any minute. Even if it didn’t precipitate, the clouds were supposedly too thick to see anything at the summit. One optimistic couple informed us that if it hadn’t rained by two o’clock, the clouds should clear up. That tiny silver lining gave us the confidence to blindly proceed upward. 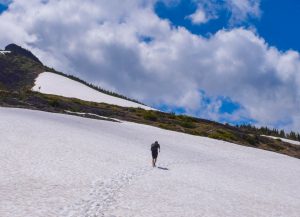 Sure enough, the weather improved. After crossing over rocky terrain and snow, only a half-mile was left.

That last half-mile was a special kind of awful. The trail took a steep upward trajectory of tedious switchbacks (when a hiking path winds back and forth to scale an incline). The mountain was littered with dead trees and sandstone. Despite the cold breeze, the sun heated the stones to become a tempting bed of flaky daggers to lie in. It was around this time that the delirium must’ve set in.

I have vague recollections of cheerful sing-alongs to made-up songs welcoming death. Laughter turned to tears, and tears turned to collapsing and making rock angels in the sandstone. That whole last portion was a blur. My dog may have visited me in a fever dream. Who knows? I don’t.

Excruciatingly soon enough, the fire tower at the top of the mountain was reached. Standing along the top of the Rockies, where the continent diverges, we were in awe of creation around us. The lakes we had walked along that morning were magnificent blue puddles in a valley of green. In every direction glacial peaks stood as eye-level equals, yet towered over the land below. After an hour of lunch and creating a sweet ass rock stack, we set off to backtrack the same nine miles we had just scaled. 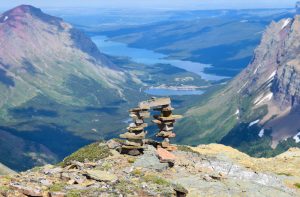 The way down was a blast. Feeling rejuvenated on a nature high, we took an improvised shortcut of surfing down the sandstones. Soon arriving at the snowy slopes, we improvised again to use jackets and rain covers to sled down the hills. Given a shot at redemption, I managed to cross the river without squealing this time. Maybe the hike made me manlier. Maybe I was just exhausted.

After hours of downhill trekking, finally the sun was low and we had arrived back at the trailhead. Nine hours and eighteen miles later, it was damn time for a huckleberry beer or three. 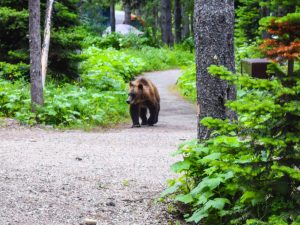 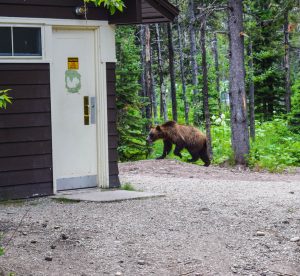 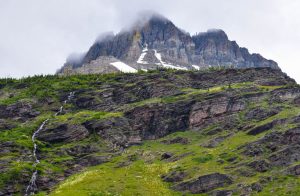 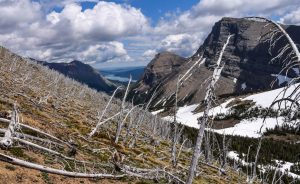 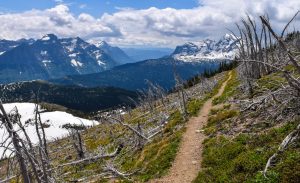 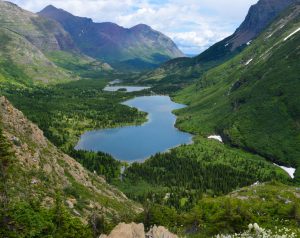 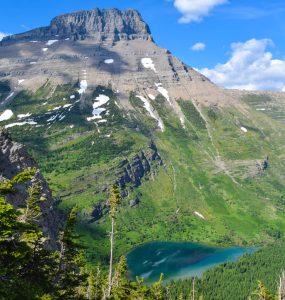 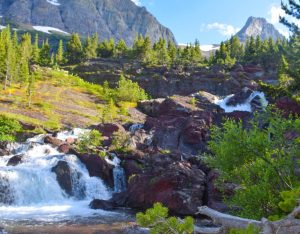 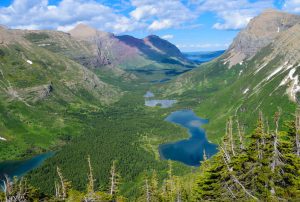